The place from where the Csaba sausage gets it name may easily give you the impression that only sausages made by Békéscsaba people or in Békéscsaba can be called ‘csabai’. However, this is not so. The secret to the Csaba sausage lies primarily in the manner of its preparation as well as its ingredients and seasoning; in short, its characteristics rather than the place where it is made. The sausages made in Medgyesegyháza and Ambrózfalva, both lying in the Békéscsaba area and established by the original settlers of Békéscsaba, can just as rightly be called ‘csabai’ as the one prepared in the town after which it is named. In fact, you can make Csaba sausage anywhere in Hungary or the world for that matter if your ‘product’ meets the criteria of the Csaba sausage. It should be added that although Békéscsaba people prepare both thin and thick sausages, the Csaba sausage usually means the latter made mainly for consumption in the summer.
Similar to the wines of small-scale producers such as kiskőrösi kadarka, which varies from one Kiskőrös small-scale producer to the next, because its taste, colour and alcoholic strength depend on the soil, the wine cellar, the barrel, the ripeness of grapes, the time spent on grape marc and the number of the occasions aeration (‘breathing’) occurs, so the characteristics of the Csaba sausage are affected by a number of factors, like the type and the age of the hog whose meat will be processed, the quality and quantity of the red ground paprika and its proportion to other ingredients, the wood used for smoking and how the sausages are stored. Overall, you might say, in Békéscsaba, so many houses, so many sausages! Nevertheless, there are fundamental criteria that all Csaba sausages are expected to fulfil.
First and foremost, the real thing must be made exclusively from pork. No other meat is allowed to be added. However, meat must come from various parts of the fattening pig, such as the leg, the rib, the loin or rump; otherwise the sausage will be too fatty or too lean. Therefore, in contrast with salamis, no additional lard is needed for the Csaba sausage.
Old recipes for the Csaba sausage stipulate hog casings, i.e. the rectum and an approximately 1.5-metre long piece of the connecting colon (called ‘kuláré’). This ensures that a treasured feature of the Csaba sausage, namely its juiciness, is preserved. Then the sausage will not be dry even when it is a year old, say.
A key spice of the Csaba sausage is ground red paprika. Although, in addition to ground red paprika and salt, caraway and garlic are also among the ingredients, neither salt, nor caraway, nor garlic should be too conspicuous, as they may stifle each other. Rather, they should blend with each other in harmony – with the colour, taste and the spicy hotness of the ground red paprika playing the main role. Hot spicy paprika is an indispensable spice, because the genuine Csaba sausage should be hot or at least quite hot. At the same time, édesnemes (a type of red ground paprika) is also needed, as it adds colour to the meat. The real thing is bright red and should also please the eye; it is never yellowish or colourless.
Smoking gives a special flavour to the Csaba sausage. Once straw or cornstalk was used for smoking in open flues. Today, beech sawdust or corncob is used instead.
In summary, the Csaba sausage is made from pork seasoned with ground red paprika. It is neither crumbly nor dry. It is a juicy, spicy hot and bright red cured delicacy that has a slightly smoky taste. 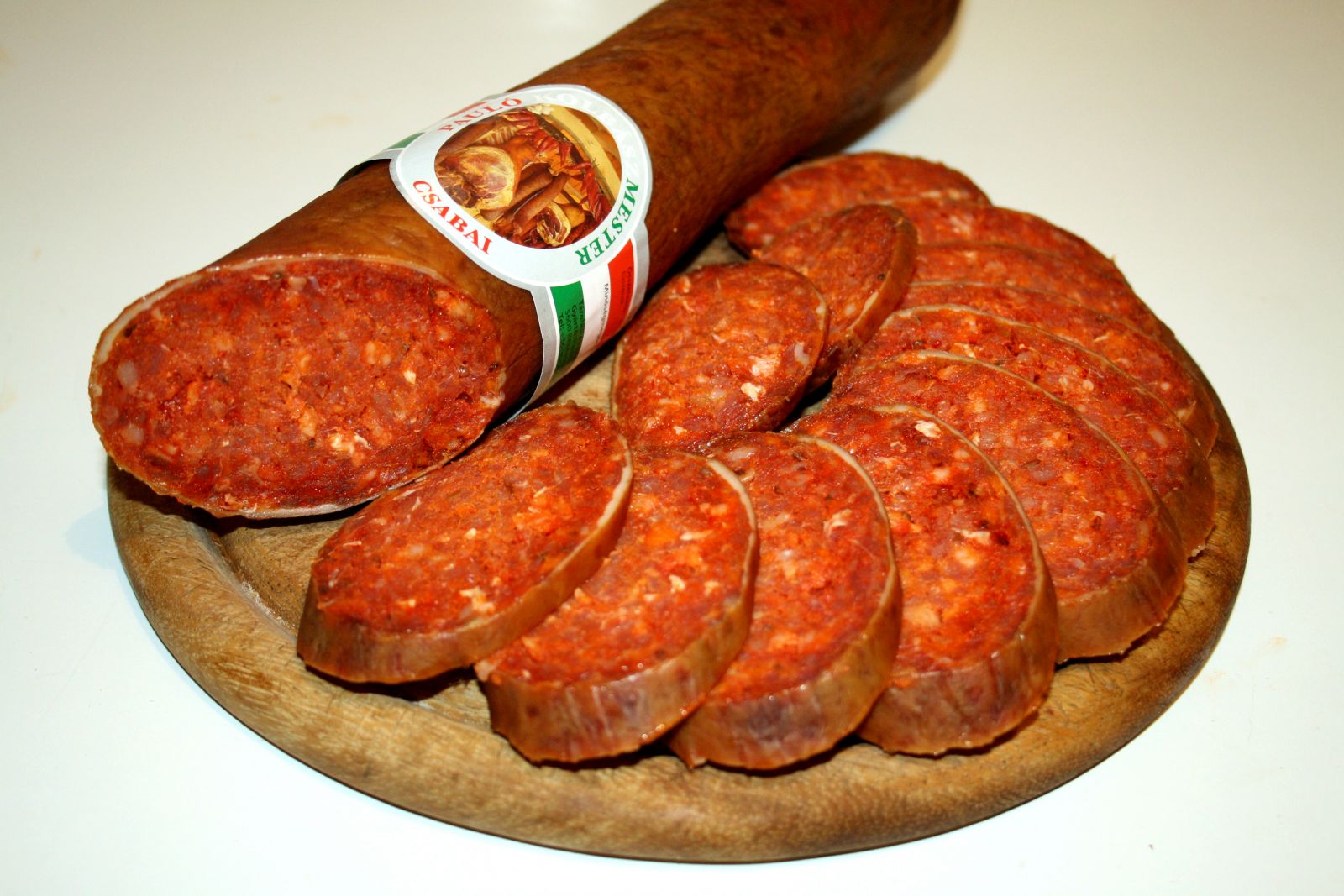 The ‘secret recipe’
Ingredients: 10 kilos of mixed pork (leg, rib, loin, thin flank and rump) and some bacon if there is not enough fat. 200 grams of mild ground red homemade paprika, 50 grams of spicy hot ground red homemade paprika, 240 grams of coarse salt, 30 grams of finely chopped garlic and 20 grams of caraway seeds
The best time for making the thick variety of the Csaba sausage is the period just before the Christmas season, when it is already quite cold. The pig is slaughtered early in the morning. It is blow-torched to remove hair, washed and butchered, then placed on a butcher’s table inside a dedicated room. The meat is deboned and ground with a hand-driven meat grinder with a coarse screen (i.e. one comprising holes 6 mm in diameter). The spices listed above are added to the still warm meat, which is then well kneaded. (Warm meat has a better adhesive capacity and is firmer in texture.) After all the ingredients have been mixed well, the meat is taken outside and spread 10 cm thick on a clean table top. When the meat is cold, it is taken back and stuffed into hog casings (the colon) using a hand-driven meat grinder with a nozzle 10 or 20 mm in diameter (i.e. a small or a large one), equipped with a feed tube. The two ends of the sausage are tied in such a way that each sausage can be hanged on a separate smoking rod. Then the rods are placed on sausage stands (racks) in the pantry. There should be a constant flow of air in the pantry and the temperature should be no higher than 6 °C. After two days there, sausages are taken to the smokehouse or hanged in an open flue. Smoking over slowly smouldering beech sawdust takes six days. The temperature must not be higher than 12 °C. Once smoked, sausages are stored in the pantry, where they are left to cure at 18 °C. It takes the delicious, thick, homemade Csaba sausage about three months to cure.